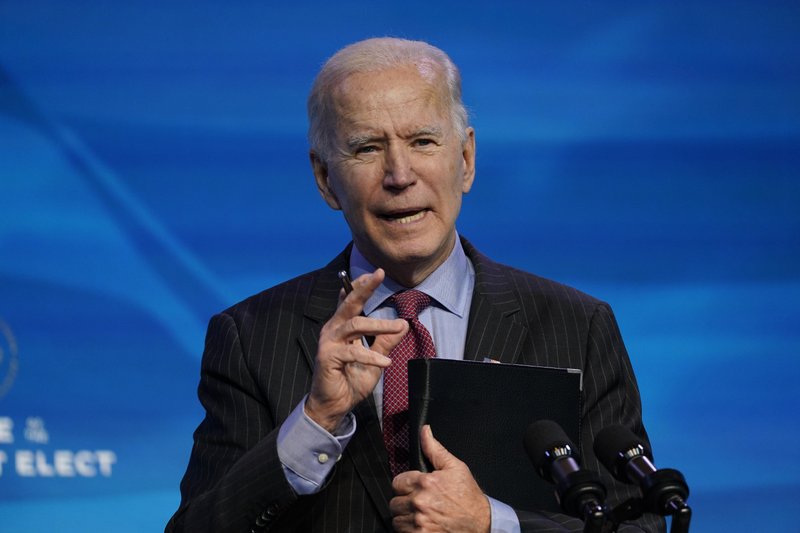 FILE – In this Jan. 8, 2021, file photo, President-elect Joe Biden speaks during an event at The Queen theater in Wilmington, Del. A coronavirus action plan fromBiden centers on a mass vaccination campaign and closer coordination among all levels of government. The Biden plan comes as a divided nation remains caught in the grip of the pandemic’s most dangerous wave yet. (AP Photo/Susan Walsh)

WILMINGTON, Del. (AP) — A coronavirus action plan being unveiled by President-elect Joe Biden centers on a mass vaccination campaign and closer coordination among all levels of government.

The Biden plan comes as a divided nation remains caught in the grip of the pandemic’s most dangerous wave yet. So far, more than 380,000 Americans have died.

Biden hopes his multidimensional strategy, expected to be detailed in a Thursday evening speech, will put the country on the path to recovery by the end of his first 100 days. “It’s going to be hard,” Biden said Monday after he got his second vaccine shot. “It’s not going to be easy. But we can get it done.”

A more disciplined focus on vaccination is the new and widely anticipated game-changing element, but that’s far from the whole story. Biden is asking Americans to override their sense of pandemic fatigue and recommit to wearing masks, practicing social distancing, and avoiding indoor gatherings, particularly larger ones. That’s still the surest way to brake the COVID-19 wave, with more than 4,400 deaths reported just on Tuesday.

Biden has also talked about asking Congress to pump more money to states, to help their efforts to contain the pandemic and replenish depleted coffers that pay for basic services. And Democratic lawmakers are eager to push for $2,000 economic stimulus payments to Americans.

Senate Democratic leader Chuck Schumer of New York said the Biden COVID-19 package will be the first order of business this year.

But Biden’s biggest challenge is to “win the hearts and minds of the American people to follow his lead,” said Dr. Leana Wen, a public health expert and emergency physician.

With the backing of Congress and the expertise of private and government scientists, the Trump administration has delivered two highly effective vaccines and more are on the way. Yet a month after the first shots were given, the nation’s vaccination campaign is off to a slow start with about 10.3 million people getting the first of two shots, although more than 29 million doses have been delivered.

Biden aims to speed that up by delivering more vaccine and working closely with states and local communities to get shots into the arms of more people. The Trump administration provided the vaccine to states and set guidelines for who should get priority for shots, but largely left it up to state and local officials to organize their vaccination campaigns.

“This is going to entail coordination at all levels, as well as resources,” said Dr. Nadine Gracia, executive vice president of the nonpartisan Trust for America’s Health. “There is a commitment the (incoming) administration has articulated to address the needs of communities.”

Biden has set a goal of administering 100 million shots in his first 100 days. The pace of vaccination is approaching 1 million shots a day, but it needs to be nearly double that to reach his mark.

President Donald Trump repeatedly asserted the coronavirus would go away on its own. Early on, he said it would disappear with warmer weather, and later he said after the election. But Biden sees the pandemic on the level of an existential threat. “That’s my No. 1 concern, to get the virus under control,” he said last week.

At the pinnacle of power, Trump’s leadership during the pandemic has been erratic. He did back “Operation Warp Speed ” to quickly develop vaccines and treatments, but he also picked fights with leading government scientists like Dr. Anthony Fauci and his own appointees at the Food and Drug Administration and the Centers for Disease Control and Prevention.

Biden has pledged to take his lead from science, and has named Fauci, head of the National Institute of Allergy and Infectious Diseases, as his top medical adviser. He has tapped businessman Jeff Zients, who has a reputation for successfully tackling complex missions, to coordinate the government’s coronavirus response. He’s also selected Yale medicine professor Dr. Marcella Nunez-Smith, to head an effort to ensure equity and fairness for racial and ethnic minorities in access to vaccines and treatments.

But he’ll need more than top-resume talent, experts say. It’s still unclear how the new administration will address the issue of vaccine hesitancy, the doubts and suspicions that keep many people from getting a shot. Polls show it’s particularly a problem among Black Americans. “It’s important to acknowledge the reasons why it exists and work to earn trust and build vaccine confidence in communities,” said Gracia.

Next Wednesday, when Biden will be sworn in as president, marks the one-year anniversary of the first confirmed case of COVID-19 in the United States.