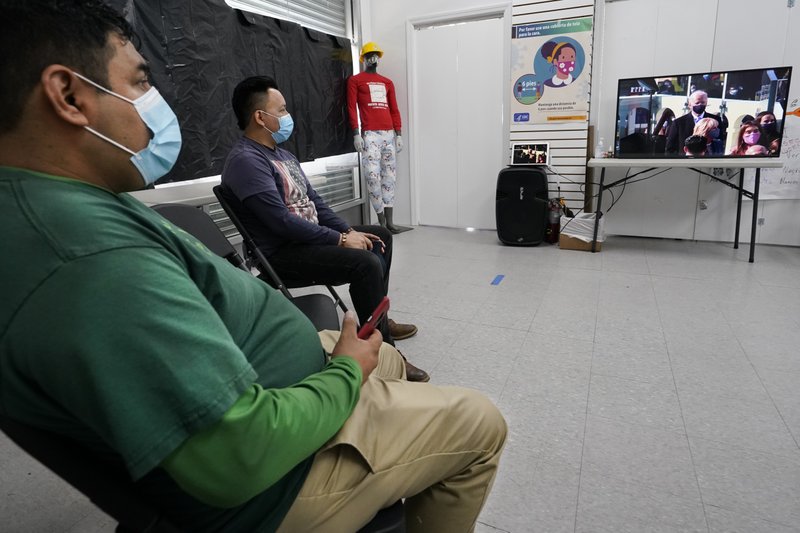 HOMESTEAD, Fla. (AP) — Immigrants cheered President Joe Biden’s plan to provide a path to U.S. citizenship for about 11 million people without legal status, mixing hope with guarded optimism Wednesday amid a seismic shift in how the American government views and treats them.

The newly inaugurated president moved to reverse four years of harsh restrictions and mass deportation with a plan for sweeping legislation on citizenship. Biden also issued executive orders reversing some of former President Donald Trump’s immigration policies, such as halting work on a U.S.-Mexico border wall and lifting a travel ban on people from several predominantly Muslim countries. He also ordered his Cabinet to work to keep deportation protections for hundreds of thousands of people brought to the U.S. as children.

“This sets a new narrative, moving us away from being seen as criminals and people on the public charge to opening the door for us to eventually become Americans,” said Yanira Arias, a Salvadoran immigrant with Temporary Protected Status who lives in Puerto Rico, a U.S. territory.

Arias is among about 400,000 people given the designation after fleeing violence or natural disasters.

“It sets a more hopeful future for immigrants in the U.S., but it all depends on the Congress, especially the Senate,” Arias, a national campaigns manager for the immigrant advocacy group Alianza Americas, said of the citizenship effort.

Success of the legislation is far from certain in a divided Congress, where opposition is expected to be tough. The most recent immigration reform attempts on a similar scale failed — in 2007 under then-President George W. Bush and in 2013 under then-President Barack Obama.

“I am hopeful that he’ll give us legal status,” said Aguilar, who was pregnant and alone when she came to the U.S. from Mexico in 1993. She worked in the fields for years before starting her own business farming jicama root.

“There is hope!” Aguilar cried out after Biden was sworn in. “So many people have suffered.”

Some of the farmworkers at the backyard gathering about 35 miles (56 kilometers) south of Miami said they were disappointed Biden didn’t mention immigration reforms in his speech.

“I have faith in God, not in presidents,” said Sofía Hernández, an agricultural worker who has lived in the U.S. without legal status since 1989. “So many have said they are going to do things, and I don’t see any results.”

Hernandez came from Mexico, seeking economic opportunity. Her three children were born in the U.S. and she regularly sent money to her family back home before her parents died.

“My dream is to go and see my family and come back to stay with my children,” Hernandez said.

In New York, Blanca Cedillos said she also was disappointed Biden did not mention immigration during the speech she watched with a half-dozen other masked immigrants at the Workers Justice Project.

“I was hoping he would say something,” said Cedillos, a Salvadoran who lost her job as a nanny during the coronavirus pandemic and now gets by with a few housecleaning jobs and a weekly food box from the nonprofit that offers services to immigrants.

Cedillos has lived in the U.S. without authorization for 18 years and hopes to eventually visit her four children in Central America, then return legally to the U.S.

“I have told them that that trip may happen now. Hopefully, if this new president gives me the opportunity,” she said.

Guatemalan construction worker Gustavo Ajché, who came to the U.S. in 2004, watched the Spanish language broadcast with Cedillos.

“I don’t want to get too excited because I might get frustrated afterward, like has happened in the past,” Ajché said. “I have been here many years, I have paid my taxes, I am hoping something will be done.”

In Phoenix, Tony Valdovinos, a local campaign consultant who was brought to the U.S. from Mexico as a small child, said he isn’t celebrating yet.

He’s among those who have benefited from the Obama-era Deferred Action for Childhood Arrivals program, or DACA, which protects immigrants brought to the U.S. as children from deportation.

“It’s hard to put your heart into it when these things have failed in the past,” Valdovinos said. “We’ve been beaten down so much.”

Maria Rodriguez, executive director of the Florida Immigrant Coalition in Miami, said she feels much the same way.

“I’m so happy and relieved, but we are still afraid of getting our hearts broken again,” she said. “We’ve been through this so many times, but we really need to bring through a solution that goes forward.”

Los Angeles janitor Anabella Aguirre wants that solution not only for herself, but for her two daughters, both DACA recipients now starting their careers.

“Like thousands of mothers and fathers, I want for my daughters to have something better in this country,” Aguirre said. “We hope that today, this dawn, brings hope.”