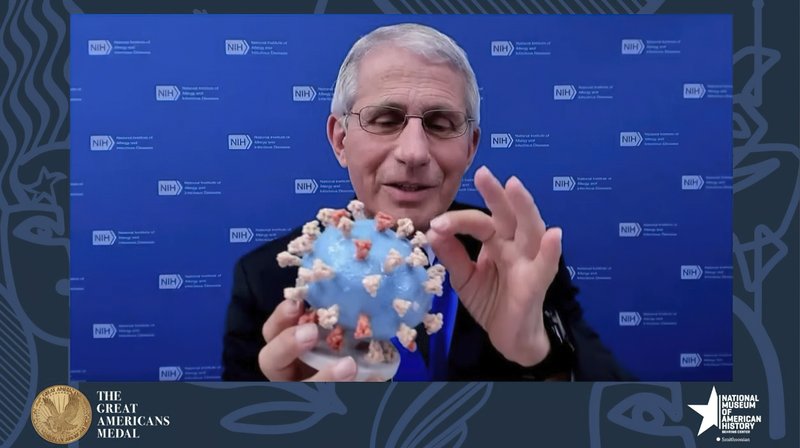 WASHINGTON (AP) — Dr. Anthony Fauci, the face of the U.S. government’s pandemic response, has donated his personal 3D model of the COVID-19 virus to the Smithsonian’s National Museum of American History.

The museum on Tuesday honored Fauci with its Great Americans Medal.

“Dr. Fauci has helped save millions of lives and advanced the treatment and our understanding of infectious and immunologic diseases across more than five decades of public service,” said Anthea M. Hartig, the museum’s director. “His humanitarianism and dedication truly exemplify what it means to be a Great American.”

The museum asked Fauci to contribute a personal artifact to mark the pandemic, and he chose the lumpy blue and orange ball that he used to explain the complexities of the virus in dozens of interviews.

The model was made with a 3D printer and shows what the Smithsonian’s announcement calls “the various components of the SARS-CoV-2 virion (the complete, infectious form of the virus), including the spike protein.”

Fauci showed off his new medal in a video call Tuesday night, calling it “an extraordinary and humbling” honor.

“This has been a terrible year in so many respects,” he said. “Decades from now, people will be talking about the experience that we went through.”

Fauci, 80, is the director of the U.S. National Institute of Allergy and Infectious Diseases. After serving as the beleaguered and frequently sidelined face of the Trump administration’s COVID response, Fauci was retained as a senior adviser to President Joe Biden.

Fauci received the Presidential Medal of Freedom, America’s highest civilian award, in 2008 from then-President George W. Bush for his decades of work, dating back to the earliest days of the AIDS crisis.